Please register for the Local Government Tourism Conference – detail below.

Applications close: Friday, 27 March 2015! Thebe Reed has once again made available an opportunity for small companies with a focus on responsible travel experiences to showcase their products and services at WTM Africa. An hour long RT Speed Marketing Session will be held from 15h30 – 16h30 on Thursday, April 16 on the trade.. read more → 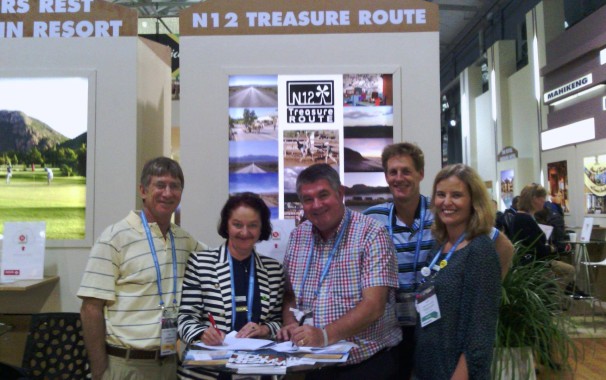 Tourism is the point of convergence between the economy, society, culture, history and the environment. The prospect of tourism dollars justifies initiatives that place an economic value on the these factors. As such the tourism sector should be a leader within the area of sustainable business practice. For some leading companies this is the case… read more →

Caroline Ungersbock, co-founder of the Sustainable Tourism Partnership Programme (STPP), was the recipient of the Chairman’s Awa rd at the inaugural Tourism Grading Council of South Africa (TGCSA) Annual Assessor Conference Recognition Awards on 3 March. “This award recognizes an individual who has made extensive and significant contribution to the TGCSA’s brand through promoting the.. read more →

Heidi van der Watt, one of Tourism South Africa’s most respected and knowledgeable responsible tourism specialists, has been appointed to the Sustainable Tourism Partnership Programme’s board of directors.Heidi’s appointment is perfectly timed as the STPP is gearing up for 2014, building on its successes of its first year.  The STPP is focused on main-streaming sustainable.. read more →

Caroline Ungersbock, co-founder of the Sustainable Tourism Partnership Programme (STPP), has relinquished her role as president of the NAA-SA.  “It is the right time to re-focus my energy  and role in the industry on the broader sustainability of small tourism businesses and the critical part they have in the growth and development of the industry”,.. read more →

Recognising the importance of the tourism sector and the role of SMME’s The Second Annual Tourism 2020 Dialogue promises a few surprises from international and local organisations for small businesses in South Africa. The content of these s are highly confidential at the moment, yet the organisers are excited and will reveal all at the.. read more →

The Sustainable Tourism Partnership Programme (STPP) recently announced that between R2-million and R10-million is needed per annum to successfully continue the strive to inform, educate and support Small Accommodation Establishments  and Small Tourism Businesses throughout South Africa. This announcement was made at the non-profit organisation’s Patrons and Partners launch the Monarch Hotel Rosebank on Tuesday,.. read more →

Support the STPP and make a difference with your MySchool card! Click below to apply: